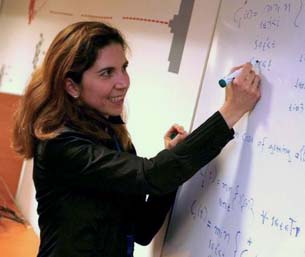 Nuria Oliver is a computer scientist. She holds a Ph.D. from the Media Lab at MIT. She is the first female computer scientist in Spain to be named an ACM Distinguished Scientist and an ACM Fellow. She is also a Fellow of the European Association of Artificial Intelligence and a IEEE Fellow. She is a member of the Academia Europaea and the fourth and youngest female member of the Spanish Royal Academy of Engineering. In 2018 she was named Engineer of the Year by the Professional Association of Telecommunication Engineers of Spain and she received an honorary doctorate from the University Miguel Hernandez

She is well known for her work in computational models of human behavior, human computer-interaction, intelligent user interfaces, mobile computing and big data for social good. She is the named inventor of 41 patents. She is a frequent keynote speaker both for technical and non-technical audiences. She regularly collaborates with and is featured by the media. She is very passionate about the power of technology to improve our quality of life, both individually and collectively (Wikipedia)